Anyone else make a temperature blanket? Jan 2019 - Dec 2019 made into two blankets for a wedding present (the year they met). Highly recommend incorporating tassels so avoid having to weave in 300+ loose ends!!

Anyone else make a temperature blanket? Jan 2019 - Dec 2019 made into two blankets for a wedding present (the year they met). Highly recommend incorporating tassels so avoid having to weave in 300+ loose ends!! 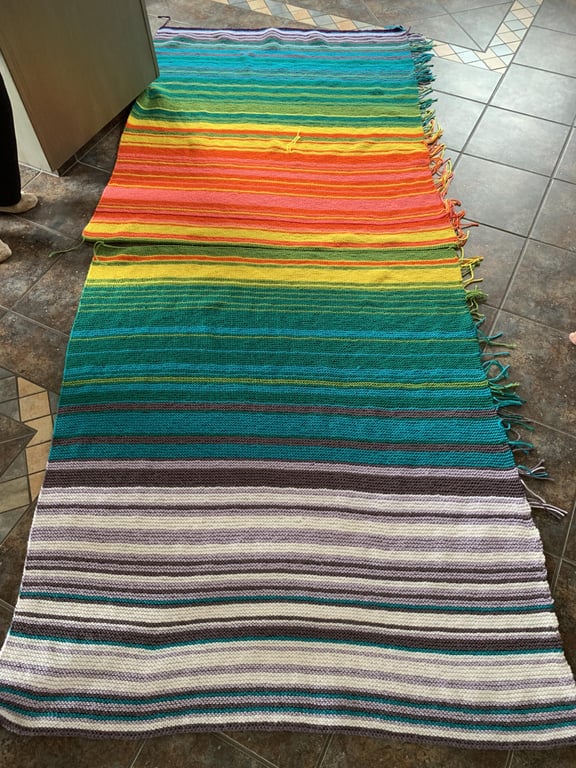 Next time, you could take your ends in as you go. It's very simple once you learn the technique and will save you immense amounts of time and frustration. You can google the term "knitting weaving ends in as you go" and get millions of hits, but in a nutshell: Cut the old yarn, leaving at least a six-inch tail. Start the new yarn, leaving a similar tail. Knit the first stitch with the new yarn. Then do this: insert the needle to make the next stitch, take the end of the new yarn and drape it over the left-hand needle, wrap the stitch as usual, lift the end back off the LH needle, pull the stitch through. Repeat this with the next stitch and the old yarn. Work in this manner for ten or twelve stitches or so, alternating old and new yarn ends. You can tug the edge stitch tight after the second stitch. You can follow either end back to the beginning and tug it snug at any time. That's why you're leaving those long ends, which you can clip short at any time: I usually do a bunch of ends and then go back and clip them all short at the same time, to keep from having to pick up the scissors every time you change colours. You will notice that there are no knots: you don't need them.

Thanks! My grandma and aunt do this for crochet and I’ve been meaning to learn the same for knitting

Can you do this with seed stitch?

Yes, but it really only works when the front side is a knit stitch, which means you’re locking each end in every fourth stitch rather than every second stitch. It’ll still work fine: there will be floats on the wrong side, that’s all, nothing wrong with that.

I'm making one for my brother right now from the year he was born! I'm in Wisconsin, so I have lots of different colors, too.

Beautiful! I have never made one, but i salute you for doing it!

Than you! Might not make another one unless I change the color each row and increase the # of sts, but it looks so great when the rows are solid stripes instead of what it looks like on the wrong side. Such a simple pattern that turns out really great!

Welcome! We've noticed you are a pretty new Reddit account, so we just wanted to let you know to check out the subreddit rules [here](https://www.reddit.com/r/knitting/wiki/rules). You can always bookmark our post and comment rules are listed in the sidebar. You are responsible for following them! If you see a comment or post that breaks the rules, please report it to the moderators using the Report button. This helps keep the subreddit clear of rule-breaking content. **What do people forget the most, you ask? To post the pattern and yarn in their COMMENTS!** If Automoderator has made a mistake and you don't know why your post was flagged, please send a [message to the mods](http://www.reddit.com/message/compose?to=/r/knitting). We'll get back to you as soon as we can. Are you a mobile user? See full set of rules here if you can't find them in your app [Link](https://imgur.com/a/1VuTd) Here's a post about how to find the rules in most apps [Link](https://redd.it/84mid3) *I am a bot, and this action was performed automatically. Please [contact the moderators of this subreddit](/message/compose/?to=/r/knitting) if you have any questions or concerns.*

That’s a great idea too - what a year to immortalisé in yarn!

It’s beautiful! Such long projects but worth it in the end. I’ve made 2 before that we’re both gifts. I still need one for me lol

Yes! I’m considering just making a temperature scarf for the year I was born instead

Ooh I’ve been considering doing the year I was born too!

It was tricky getting the data for a past year, but I hope I’m not THAT old that the year I was born is any harder to find

A government one... not sure what the name was but it was super easy to copy/paste the data into excel then do conditional formatting to highlight the cells for the color range (Excel nerd alert!)

I was just thinking about this. Or a stripe for the weather of my birthday every year since birth.

Well, I would do multiple rows per day or it would be a bit short. I was thinking a scarf with a stitch pattern of maybe a four row repeat. When I got up to date I would try to bind it off in a way that I could wear it, but on my following birthday I could undo it and add a new row.

That’s a cool take on it! Could be the average temp for each year?

I love the colour choices you made! This looks gorgeous!

Thank you! I’m in Atlantic Canada so there’s a ton of temperature variance in it. 10 colors that cover -16 and colder to +32 and higher (in Celsius)

I’m halfway through one that started October 7 when my friend’s baby was born. I’m knitting squares and am a month behind. But yesterday I made 11 squares. Catch up I will! Your blanket looks lovely and I love the tassels.

Oh that’s a great idea. I suggested my aunt make one for her grandchildren and either do it where they live (England) or here (Atlantic Canada). I just got her started on hats, though, so she’s addicted to those right now

I enjoyed the first blanket. This is baby #2 and I’m finding the squares tedious. I guess WIP you do for a whole year can get repetitive so there’s that.