“You hurt people. Over and over and over. And then there’s this show of remorse. In the end, you’re going to hurt everyone around you. “ S3:E10

“You hurt people. Over and over and over. And then there’s this show of remorse. In the end, you’re going to hurt everyone around you. “ S3:E10 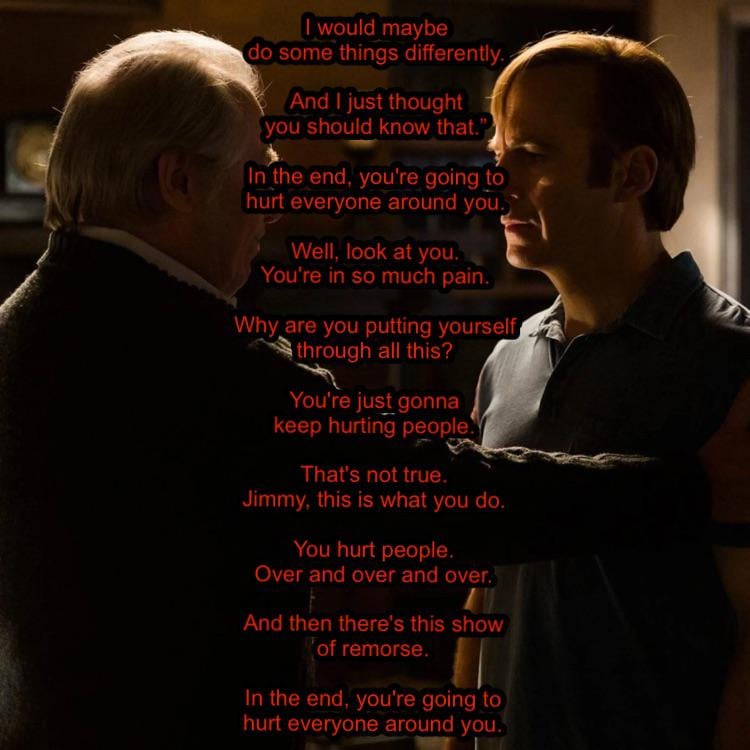 Chuck has got to be one of the greatest written and acted characters Vince Gillian has created, right under Walter White and Saul himself. His whole character arc was frustrating, depressing, uplifting and absolutely tragic. Going from the best at what he did to a sick, angry old man. If he was honest about his mental health and didn’t care about the stigma of mental illness and what it would have done to his career, he could have gotten help and got back to work. Just like Walter White, his pride and his ego kept him from moving out of his unhealthy lifestyle and doing what was right for himself.

TIL you can just post screen grabs from the show with the dialogue typed out on it and post it to the sub.

Projection. Chuck drove everyone away. His wife, Howard, and Jimmy. Died alone.

>Projection. Chuck drove everyone away. His wife, Howard, and Jimmy. Died alone You could say the same about Jimmy/Saul. He is currently alone in Omaha and may very well die alone.

Yes. There is that similarity between Chuck and Gene.

For sure. I also think it’s a premonition of things to come for season six. Sadly

Do we even know why Chuck and Rebecca seperated yet? They seem to have left on friendly terms.

Also noteworthy that the angelic halo of light on Chuck’s head is brighter than Jimmy’s….

For me, the true tragedy lies in the fact Jimmy/Saul is going to end up doing just what Chuck said he'd do because Chuck hurt him over and over again.

>he'd do because Chuck hurt him over and over again. How? The only serious thing Chuck did to Jimmy was bait him into doing a crime. Jimmy did not have to break into Chuck's home.

Always expecting the worse out of Jimmy comes to mind.

How does that force Jimmy to do bad stuff? Especially, bad stuff that Jimmy does before he knows about that belief of Chuck's?

There is no point in showing remorse if you are going to keep doing the very same acts that are causing you to feel remorse. Feeling sorry and correcting things for Irene is pointless if you are going to do the same act to her or another old lady in the future.

Many people keep condemning Chuck for the “mean” remarks, yet completely disregard the context of what Jimmy had just done, and what he always does over and over. A) Jimmy and Kim tore down Chuck, an incident that was also largely Chuck’s own fault, yes, but the very fact that Jimmy brought Rebecca into this—AND admitting she would *hate* Jimmy afterwards, knowing full well his intention was never about helping Chuck, but to use Rebecca to further inflict pain on him in the most unnecessary way—showed that Jimmy wanted to not just win the case, but actually hurt Chuck. Jimmy also proved to Chuck in court that his **plan** of bringing Rebecca was not to “rattle” Chuck like Chuck had thought Jimmy was doing, but rather it was clear that her presence had almost *zero bearing* on the outcome of the case. Furthermore, at the end of it, Jimmy proved to Kim and Rebecca that he really didn’t care about Chuck at all, he was unwilling to go help him, even went so fat to claim they were no longer brothers. In short, bringing Rebecca in was never to help Chuck, instead, he meant to use her as a tool to *hurt* Chuck—when it was not remotely close to being necessary. B) it wasn’t enough that Jimmy won the case, permanently damaged Chuck’s reputation, and hurt him using his feelings for his ex-wife, but Jimmy felt absolutely compelled to *end him*, for which he planned the whole stunt at the insurance agency and pushed Chuck to the brink of his career—even though Chuck’s own pride ultimately burned his own bridge, he was given no choice to go back to the way it was, it was either having *the entire HHM firm* get ripped off by the insurance company, or end his career, even Howard didn’t want the firm to get dragged down and ripped off because of Chuck alone—either way his career was *directly* ended by Jimmy’s insurance stunt. C) Jimmy came to Chuck some time later after Kim’s accident, feeling all remorseful and concerned AGAIN, exactly like what Chuck described about him—hurt people, act sorry about it, expect people to not only forget everything he’s done, but must forgive and embrace him, and he has all the excuses in the whole world. Oh, but cod forbid it somebody ever *wrongs* him, don’t ever expect to hold him onto the same standards how he wants others to accept him. The funny thing is, just because Jimmy is the lead character, people root for him no matter what fucking crimes and immoral shit he pulls, just like how some people *adored* Walt and *hated* Skyler when she was right about 95% of the time. Just because Chuck phrased the speech in such a way that it wasn’t meant to cuddle and warm Jimmy’s heart, people were revolted by it and called him an asshole, when literally every single thing he’s said about Jimmy turned out to be right. D) remember all the shit Jimmy pulls on others time after time? The way he treated Kim right after being denied for reinstatement, it wasn’t just *nasty*, he went with a full-on fucking *assault* on Kim, after Kim had stood by him time and time again, putting up with his ridiculous demands and childish tantrum, he flat out showed zero appreciation or remorse on anything, denied all what Kim had done *for him*, because everything was about he himself. E) Chuck said this to him wasn’t to hurt Jimmy, but because he was just as frustrated and tired of this whole brotherhood thing, he merely wanted to put Jimmy’s mind at ease and go on their own separate ways, never having to worry about each other again. You gotta look at it from Chuck’s angle. In his mind he had always gone the extra mile to look out and *save* his brother, wanting him to turn his fucking despicable life around. Even before the court, he openly showed that he never wanted Jimmy’s life destroyed, he merely wanted his license, as Chuck believed not only was Jimmy not qualified (though Jimmy proved that he smart enough to be a brilliant lawyer, at least morally, he wasn’t up to it. It’s not just how he ended up being “Saul”, but when he was still his old self, he did a bunch of unlawful and unethical stuff, as he believed the ends justify the means. his way of getting out of Davis & Main was absolutely disgusting, and he simply couldn’t understand why he was so wrong with what he did. which is [another discussion](https://reddit.com/r/betterCallSaul/comments/q8cd91/_/hgp7voe/?context=1)). To sum up, Jimmy could’ve won the case, walked away, and stopped caring about Chuck. But nooo, must fucking *destroy* Chuck because he felt it was necessary. Chuck was right about him all along. Just like what Howard said to Kim: “do you know who knows Jimmy? Chuck.”

> Oh, but cod forbid it somebody ever wrongs him, don’t ever expect to hold him onto the same standards how he wants others to accept him. This. If one actually rewatches the scene, Jimmy makes sure to include an effort to equally throw shade at Chuck for their recent falling out.

that doesn't mean Chuck is right! He the one kept HURTTING him self for not accepting his brother and keep pushing him down to his naïve and young past. no people can change Chuck.

>him self for not accepting his brother Chuck did in this speech. That's what it was about. Telling Jimmy let go of the pretense of morality and become the criminal he is and would always be.

“You are all the things that are wrong with you. It’s not the alcohol, or the drugs, or any of the shitty things that happened to you in your career or when you were a kid. It’s you. Fuck, man, what else is there to say?”